The Criminal Investigation Department (CID) says the Interpol arrest warrants for Samuel Adam Mahama and three others over the Airbus Bribery scandal followed a request by the Office of the Special Prosecutor, Martin Amidu.

The CID made this known in a statement dated July 16, 2020, and signed by Juliana Obeng, Deputy Superintendent of Police, who heads the Public Affairs unit of the CID.

According to the statement, “following a request by the Office of the Special Prosecutor through the Criminal Investigation Department (CID) to the Interpol Secretariat, the latter has issued a Red Notice of the following individuals.”

Interpol, it would be recalled, issued an international arrest warrant for Samuel Mahama believed to be the brother of former President John Mahama over his alleged involvement in the Airbus Bribery scandal.

In his arrest warrant, Interpol indicated that for the offence, he is liable to a term of imprisonment not exceeding of 25 years.

According to Interpol, the four individuals are “fugitives wanted for prosecution” for their roles in accepting and paying €3,909,756 as bribe, on behalf of AIRBUS SE, to some key Ghanaian public officials from 2009 to 2015.

According to the summary of facts of the case as set out in the “Red Notice”, between 2009 and 2015, AIRBUS SE engaged Samuel Adam Mahama, believed to be the brother of former President John Dramani Mahama, and Philip Sean Middlemiss to accept and pay €3.9 million as bribe to some Ghanaian public officials to approve the sale of three C-295 military aircraft to the Ghana Armed Forces.

The notice said further that the suspects, Samuel Adam Mahama and Philip Sean Middlemiss, together with their accomplices, Sarah Leanne Davis and Sarah Furneaux, in order to conceal and facilitate the bribery payment, incorporated Deedum Ltd. Ghana, Deedum Ltd. UK, and Furneaux Ltd UK to consult on behalf of AIRBUS SE.

It noted that once Mr Adam Mahama is traced, “assurances are given that an extradition will be sought upon arrest of the person, in conformity with national laws and/or the applicable bilateral and multilateral treaties.”

Ghana was listed among five countries in which the Airbus paid or attempted to pay millions of dollars in bribes in exchange for contracts.

The bribes or attempted bribe led to a court in Britain slapping a fine of £3 billion on the company. 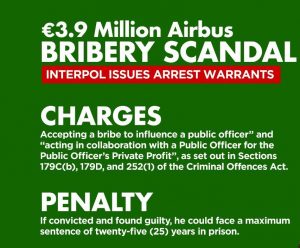