About 200 passengers on three separate flights successfully underwent COVID-19 tests at the Kotoka International Airport (KIA) on Tuesday, September 1, 2020, the first day after the reopening of the airport due to the coronavirus pandemic.

The GACL said senior officials of the Ministry of Health, Ministry of Aviation, and Ghana Health Service were present at the airport to witness the facilitation process.

The cost of the test at the airport is US$150 per each passenger.

The Kotoka International Airport (KIA) has reopened for commercial and international passenger flights, five months after it closed its gates to the world as part of the restrictions on movement to contain the spread of the coronavirus disease (COVID-19) pandemic in the country.

The voices of airport announcers were heard on the public address system at Terminal Three, welcoming passengers into the country, while at the same time reminding them of the COVID-19 protocols they needed to comply with.

Those who arrived yesterday were made up of evacuees whom the Ministry of Foreign Affairs and Regional Integration had facilitated, diplomats, willing Ghanaians returning home, as well as foreign nationals who had business to transact in the country.

Unlike previous arrangements, all passengers are now required to take mandatory tests at the airport after arriving in the country.

However, the Daily Graphic team stationed at the airport observed that travellers who arrived on the opening date went through different arrangements. While some of them passed without being subjected to a polymerase chain reaction (PCR) tests because they had certificates to set off exemption from tests, another category was picked up by the Operation COVID Safety buses stationed at the airport, amid security escort, to begin their mandatory 14-day quarantine.

The second category of passengers who went through the new regime came out of the Arrival Hall one after another in a staggered process with their luggage after going through the mandatory testing.

Meanwhile, the Food and Drugs Authority (FDA) has dispelled claims by a virologist at the Noguchi Memorial Institute for Medical Research, Dr Kofi Bonney, that the COVID-19 testing device used at the Kotoka International Airport was not reliable.

Dr Bonney in an interview on Accra-based Joy FM claimed that about half of the test to be conducted at the airport may be inaccurate because the test being conducted was not a PCR test but an antigen test which was less sensitive. 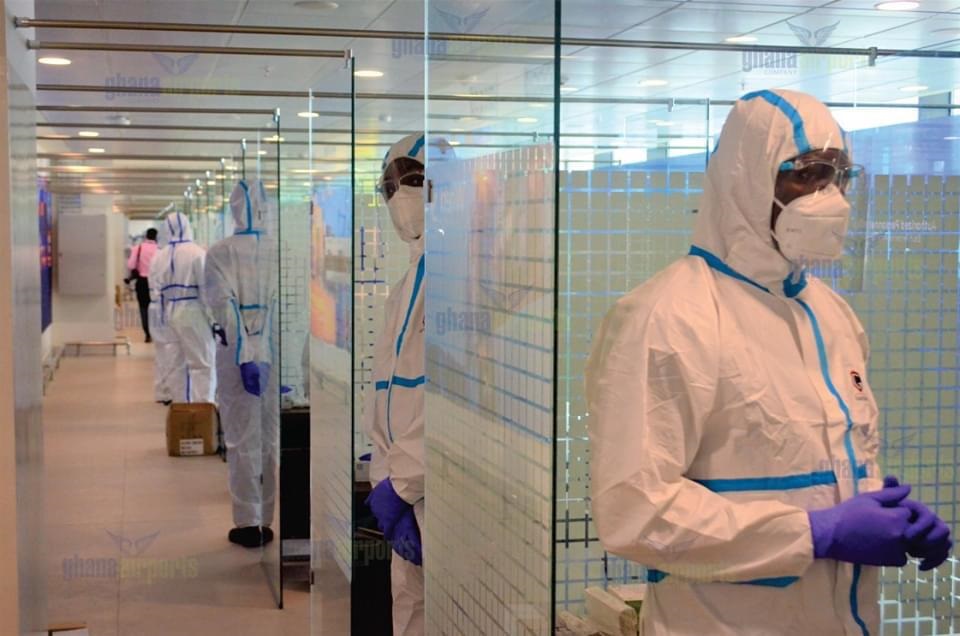 A walk through Terminal Three, the centre of attraction at the KIA, indicated that most of the businesses were still closed, in spite of the reopening of the facility.

Although some car rental companies, banks and restaurants were opened, majority of the shops at the lounge were closed for business during the time of the visit.

Some of the attendants at the few shops which opened said although the reopening of the airport was welcome news, patronage was very low.

The Country Manager of Asky Airlines, a regional airline operator, Mr Worlanyo Afadzinu, welcomed the reopening of the KIA for commercial flights, saying “Accra is one of our biggest markets in Africa”.

He said the Lome Airport, which is the airline’s base, opened earlier last month, but
“we will start scheduled flights from Accra on Friday”.

He said the airline had already released flight schedules into the system and all its retail points could now have access to the schedules for ticketing and other purposes.