Ghana is “disfigured” with murder of 90yr old woman – Akufo-Addo

President Akufo-Addo says the killing of a 90-year-old woman at Kafaba in the Savanna Region over witchcraft accusation has dented the reputation of the country.

According to him, the gruesome murder has “disfigured” Ghana.

Speaking in the region where he is currently on tour, the President called on the security agencies to expedite action on the arrest of the suspects.

“The quick response of the police will lead to the rapid administration of justice in this unfortunate matter. I will make an appropriate contribution to the Akua Denteh Foundation to express my own revulsion at the awful, tragic act that has occurred in this region,” he said.

Meanwhile, the Inspector-General of Police (IGP) Mr. James Oppong-Boanuh has dispatched homicide experts from the Police headquarters to the Savannah region, to help search for suspects.

According to a Police statement, the suspects who are believed to have fled the town include one Sanjo, who is said to have hosted Hajia Filina, a priestess who declared the deceased a witch. Others are: the priestess Hajia Filina, one Teacher Aliu, Bumaye, Ashley, and Manafo.

The IGP has also announced a two thousand Ghana Cedis (GhC2,000) reward for information leading to the arrest of any of the suspects. 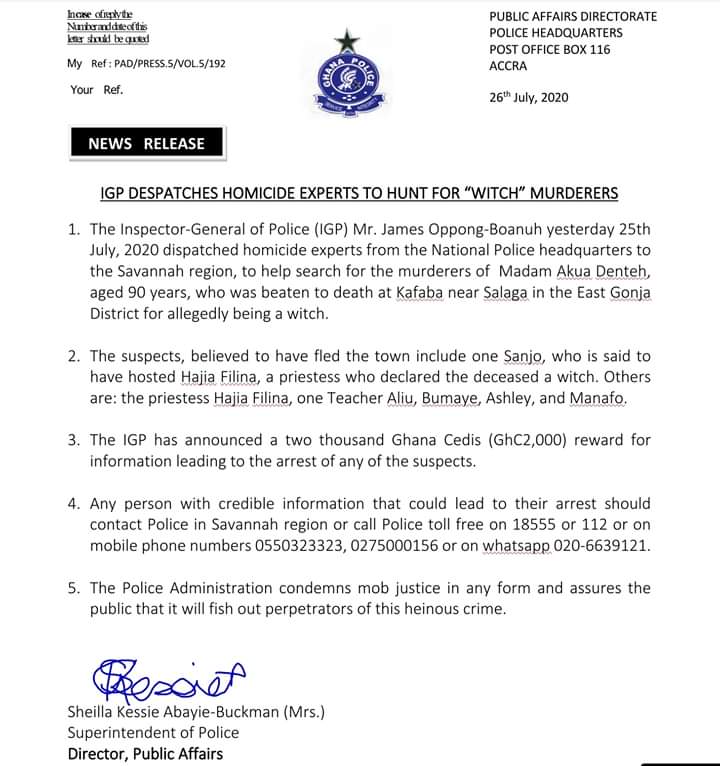 The incident happened on Thursday, July 23, 2020 in the East Gonja Municipality.

The old woman whose body has since been deposited at the Tamale Teaching Hospital (TTH) mortuary has been identified as Akua Denteh.

Former President Jerry John Rawlings has called for a serious investigation and arrest of all who were involved in the “cruel and barbaric lynching of the 90-year-old woman.