The Electoral Commission (EC) has denied issuing a voters ID card to an Asian man.

According to the EC, the voters ID card making rounds on social media and bearing the photo of an Asian male is fake.

The Commission says in a statement that the said ID card “has been photoshopped to superimpose the image of the Asian male onto the face of card.

In a statement, the Commission says it did not issue the card to the Asian man.

The Commission says the card was originally issued to Nana Kweku Okai Brako, clarifying that all of the photographs on the EX voters ID cards have a blue background. 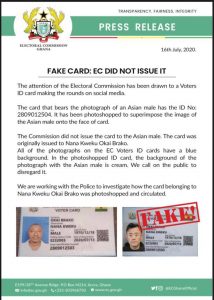