The name of the Editor of the state-owned Daily Graphic, Kobby Asmah has emerged as one of the recipients of the infamous fake UN-Kofi Annan award.

Checks by MyNewsGh.com revealed that a centre spread of the newspaper page 65 was devoted for the story in relation to the award that has turned out to be a scam.

The story written by one Emmanuel Bonney on August 31, 2020 reads in part “The Editor of the Daily Graphic, Mr Kobby Asmah,and some other professionals from various backgrounds were last Friday honoured at the seventh Global Leadership Service to Humanity Awards ceremony in Accra. The personalities honoured by the Global Public Excellence (GPE), an initiative established by 2 former United Nations Secretary General, Mr Kofi Annan were from the media, health, music, entrepreneurship, business, sports, banking, security and showbiz.

The GPE awards are presented to people from all walks of life who are working to help make the world a better place.

This year’s event was on the theme: Global, National and Continental Achievers. Companions and Leaders Innovation and Contributions to the Rise of Global Challenges: The Deadline Solutions to UN Resolution 2030 with Excellence’.

Mr Asmah was presented with the award for his leadership, excellence, innovation and achievements in the field of journalism towards peace and security.

He was presented with a gold medal and a citation which, among other things, said the honour was “In recognition and appreciation for your commitment to strengthen the Black Star Line of Africa, Africa and the global community through your leadership, business and professional service’.

Shortly after receiving the award Asmah thanked the organisers for recognizing his contributions to media excellence and professionalism. ‘This is awesome and I want to thank the organisers for this award: he said. Adding that this will spur us on to do more”

Founder of the controversial UN leadership award scheme and the Global Blueprint Excellence Award has said that he has all the guys at Multimedia ‘in his pocket’.

Kwame Owusu Fordjour’s award scheme gained popularity and was subjected to scrutiny after he recently awarded some celebrities, government officials and leading politicians in the country.

Among such astute personalities are Sarkodie, Berla Mundi, Ekow Vincent, John Boadu, the Vice-Chancellor for the University of Ghana, Ekow Vincent Assafuah, Old Tafo Parliamentary Candidate for the NPP. 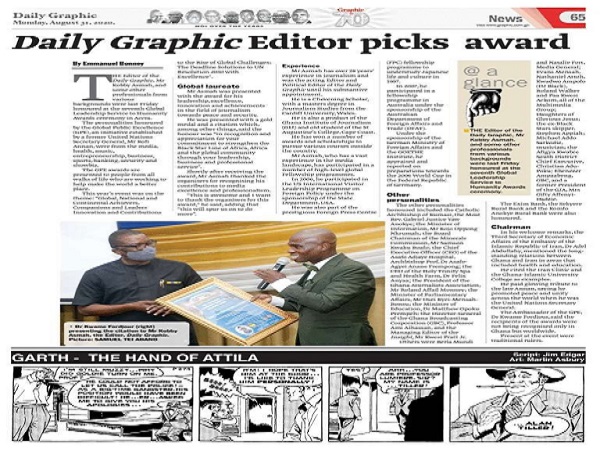