The Commission on Human Rights and Administrative Justice (CHRAJ) has directed the Deputy Northern Regional Minister, Mr. John Benam Jabaah to pursue and refund over GH¢1.5M which he personally withdrew from the Produce Buying Company’s (PBC) account to purchase nuts from a dealer in Burkina Faso in 2018 but have still not been received as at now.

In a two-page letter from CHRAJ signed by the Ashanti Regional Director, Mrs. Cynthia Martinson instructing the former General Manager of PBC, and now the Deputy Northern Regional Minister sighted by MyNewsGh.com, the Commission disclosed that, Hon. Benam’s earlier response to CHRAJ did not disclose the PBC’s Board involvement in his decision to purchase the shea nut through the mode he used even though the Board received a permission letter of his travel to Burkina Faso.

CHRAJ asked him to as a matter of urgency submit any other minutes of the Board suggesting its involvement in his decision latest by July 15, 2020.

In its conclusion, CHRAJ advised Hon. John Benam Jabaah to take the appropriate steps to retrieve the GH¢1.5M from the suppliers who have to date not made available the shea nuts products to forestall loss of money to Produce Buying Company (PBC).

“Please take notice that you have already admitted that the Cheque, as well as the requisition, was made in your name. We, therefore, advise that you take appropriate steps to retrieve the said money from the supplies to forestall loss of money to Produce Buying Company (PBC).

You have up to the 15th of July, to make the documents we have requested available for us to make a final decision on the case.”

A Kumasi-based Journalist, Samuel Kwadwo Jantuah petitioned CHRAJ in 2019 to look into possible corruption, mismanagement, and a breach of the statutory functions of PBC of which he supported his claim with revealing documents.

Mr. Jantuah in his petition described as questionable, the PBC’s investment in its subsidiaries such as the Buipe Sheanut processing factory in the Central Gonja District and Golden Bean Hotel and Lodge at Nhyiaeso in Kumasi.

The journalist also asked CHRAJ to investigate into a case where the former General Manager of PBC who is now the Deputy Northern Regional Minister, Mr. John Benam Jabaah is alleged to have personally withdrawn an amount of GH¢ 1.5 million from the company’s account to purchase nuts from a dealer in Burkina Faso in 2018 but have still not been received as at now.

The then Ashanti Regional CHRAJ Director, Mercy Larbi said in a media interview that the Commission has commenced investigations and as a result, the CEO of PBC and the Deputy Northern Regional Minister have been served and are supposed to respond within ten days.

But in the latest development, CHRAJ seems to have absolved the PBC Board pending further documents from the former General Manager, Mr. John Benam Jabaah that may implicate the Board in what is described as his personal decision. 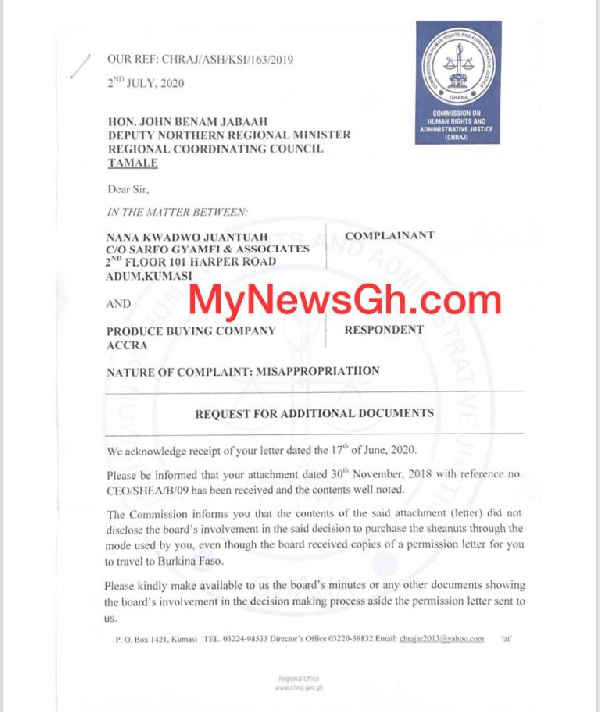 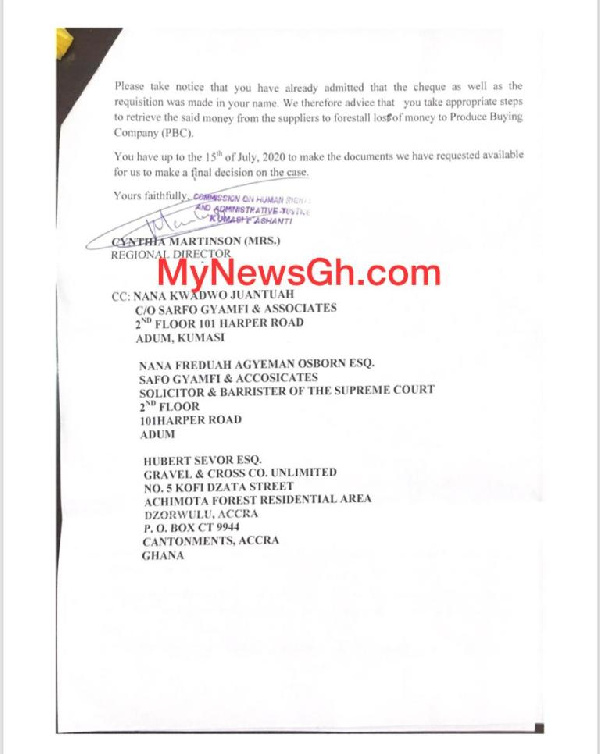 Man, 24, beaten to pulp by mob for allegedly stealing wee

Man, 24, beaten to pulp by mob for allegedly stealing wee